Confession: I wrote the most infamous CreepyPasta of all time

Check out my new channel here: irflow.info/work/oB1WvtNPod0bTbPTsSGx7Q
I'm sorry for this Creepy/Crappy Pasta
Animators channel: irflow.info
Twitch: www.twitch.tv/callmekevin
My Patreon: www.patreon.com/callmekevin
Merch: www.callmekev.in/
Twitter: CallMeKevin1811
Instagram: callmekevin1811
Edited by @Kippesoep001, @TropicalFreeze2 and Kevin
The supermarket monster:
Once in a place far away, a very long time ago there was an boy named Roger, he was tall but a bit round. He lived in a big city where unusual things seemed to happen everyday. For example, his uncle died. Anyway, Roger had lots of enimes in the city, all the people he used to like were now his enimes because he changed. He used to be a really succesful banker named Ron, but he decided to go another way and now he is a hobo named Roger. Because of this his friends thought they didn’t like him anymore so they said “your our enimy now!!!” and Roger was like “oh no, I have no friends but loads of enimes ”
Roger lives day to tomorrow by the change he gets off strangers outside mcdonalds but sometimes he. When he gets enough money he goes to the local shopping centre called “teco”. He can only buy things when they are on sale so he oinly buys things when they are on sale because he doesn’t have any much money. Sometimes he even gets enough change to buy chicken when its on sale and he goes into Kfc and says “can you cook this for me” and they do it because they are his enimes and spit in the food, yuck.
Today, on the most windy and stormy and rainy and cloudy and sad of days he decided he needed to eat and went to teco. When he went inside there was no baskets, this was weird, Roger thougth that that must be giveing them a break today so he kept going. He saw that thre bread was on sale so he was going to buy it and then an big fat hairy man ran up to him and said “NO That not f”or you! and he took the sale sign away which made the bread go back up to $100,000!! This is all in the future so thats normal for the future. Roger made a face similar to this D: and he said “But if you dont give me that I will strve” and the fat man laughed and his fat went bouncy from laughiung. Then one of ron’s enimies died so ron felt his anger rising (that happens when his enimys die” and he punched the mnan so hard that his fat fell off and the man was so angry that he cried blood. Then the lights went out so fast that roger knew he was going to be murderd. A black mist came out of the cereal boxes and the bacon was flying everywhere, pancake mix splashing over the counters, freezers freezing at higher tempratre that normal so that it was freezing the frozen pizzazas too much. ROn ran way far away to that isle thats always full of people, it has like loadsa sweets and crips, yummy. there was like 10, no wait, 15 monsters there, all black with eyes oogying with blood and tears thhat looked like bacon but were actually dead peoples skin. he screamed “fat man, help!!!” but when the fat man camer he said “You punched my fat and now you will pay………………………………………………I am your enime……” and then he ran and went iunside a freezer but forgot that the freezers froze too hard now and he died from freeze.
Roger ran to a exit and was almost out when he tripeed on something, he looked down and saw his enimie saying “help me, the pancakes were too string” and then he said “no i am roger, you were ron’s friend not mine, smelly” and he ran out the door. He was safe, he got out, he escaped, he avoided death, he was alive, he was tall, he was safe, he was ROGER. Then he wenty back in for the bread but forgot about the monsters! So when he got the bread, the monsters came out between the slices and cried blood from their months saying “we are your enimes, RON” he said “how do you kn”ow my old name? and then they ate him and he just fell down on the floor crying from death his last words were, “i am all your enimes”. Then he fell down and died. Just before he died he said “I will now be a supermarket monster”. So when you are in a supermarket remember that ron is waiting… (in the futere tho because its in the future remember?) 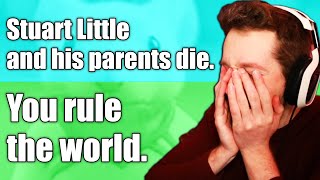 I made the worst stories ever on AI Dungeon 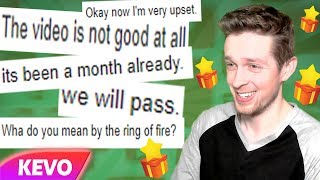 Harry Potter Book but it's written by a bot

Taking control of her phone and ruining her life

Phasmophobia but I don't believe in ghosts

Playing Interactive Fan Fiction about myself

Tommy Wiseau has a YouTube gaming show and it is wild